I thought this would be a good entry to kick off with, because it comes up so much on our Facebook group. It's confusing for many, the guidelines say 6 months and yet it seems nobody told baby.  Instead, at 23 weeks he's trying to grab food and "shouting" when it's taken away.  What to do?

To me the term "baby-led", means the journey of transitioning to solid foods is led by baby.  This includes when, what and how much.  That of course doesn't mean I'm proposing baby self-selects straight out of the KFC 'bargain bucket' under the guise of "what"; just that he gets to choose from a balanced meal, when he initiates it.

When we started solids my second child 10 years ago with (born at 34 weeks), I was really lucky to be admin on a parenting forum at the time.  We were the first UK site to display Gill Rapley's original Baby Led Weaning guidelines (there was just one other, a German site as I recall), thanks to my co-founder Annalisa and her little black book of people in the know.

And so we embarked on a fascinating journey.  I only wish I'd had a camera handy, to snap the health visitor's face when I first explained the concept.

As anyone who knows me online knows, I love research papers (geek alert, and as an aside my best complement ever was from Annalisa on this very subject).  So alongside grilling Gill via email, I started scouring journals - digesting all I could on starting solids and self feeding, including the papers reviewed to form the current guideline of 6 months. 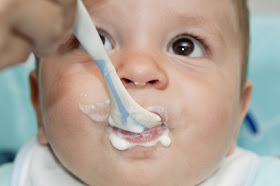 It's important to understand that the guideline assumes parents will initiate and control the introduction of solids.  Food is typically blended to a smooth, uniform texture and put in baby's mouth.

This means we then need to ask what is the optimal age to first swallow pureed food?

Research highlighted years ago that infants who started solids at 4 months or later, had less infections and better outcome than those who started earlier (as was the trend in many areas).

A guideline of 4-6 months was introduced, along with more information explaining "signs of readiness".

But this was problematic.

With purees and parent led feeding, one minute babies are not on solids - a spoon of mush later they are.  If we want to protect as many infants as possible, we need to ensure everyone feels confident accurately identifying "readiness".

But the lists were vague such as: "when you feel baby needs more than milk" or  "when she wakes more frequently", often confused with normal developmental disturbances and "growth spurts".   "When he doubles his birthweight" was a common claim, despite there being no evidence to support this theory.  Parents were told they could check if their baby's tongue thrust had gone, by touching the corners of her mouth with a spoon to see if the tongue moved forward.  If it did, she still had her reflex which resulted in the tongue pushing as much food as possible from her mouth.

But it's not foolproof.  The stimulation of the spoon on his lip can prompt him to open his mouth, and parents can be persistent, cleaning around baby's mouth and chin with the spoon and repeatedly re-offering.  Once puree is inside his mouth, some is likely to be eaten because no chewing or breaking down of the food is needed, only a swallow.

Not surprisingly many were confused and it was common for solids to be introduced too early. A study exploring solids introduction in the US 2005-2007, found that 40% of babies had solids before 4 moths.

Further studies exploring parent-led weaning provided even more insight.
When all the relevant papers were reviewed, researchers concluded it was likely some babies were ready for solids before 6 months, but others weren't.  They felt there was adequate evidence it was safe for those who were ready earlier, to wait until 6 months.

This enabled them to make  a single age recommendation, rather than relying on parents or healthcare professionals to accurately determine if baby was ready from a range of dates.


A three word message that could be easily disseminated and understood by all.  This was the recommendation made by the The World Health Organisation (WHO) in partnership with UNICEF in 2001.  The UK Department of Health adopted this guidance, as did the American Academy of Paediatrics (AAP) eventually in 2012. 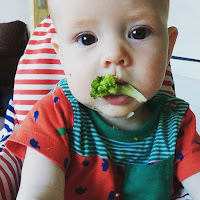 If we read all the information that goes with the tag-line, it's much more detailed that many may first think.  It describes reliable signs of readiness like "baby can picks up food and puts it in his or her mouth" and "wants to chew" - as well as clarifying increased waking at 3-5 months is not a sign baby needs solids.

The UK Department of Health echo this, stating:


"Parents should be advised of the risks associated with weaning before the neuromuscular co-ordination has developed sufficiently to allow the infant to eat solids.  Solid foods should not be offered before four months (COMA)

However, if an infant is showing signs of being ready to start solid foods before six months, for example, sitting up, taking an interest in what the rest of the family is eating, picking up, and tasting finger foods then they should be encouraged."

Alongside this, we know breastmilk contains growth hormones and cells that help the gut to mature. Whilst it was previously thought that introducing solids created a big shift in the types of bacteria that lived in baby's gut (resulting in a more "adult-like microbiome") - more recent research suggests it's stopping breastfeeding, not introducing solids that impacts most on the profile of bacteria found.

I sometimes read comments from parents saying when and what they're starting with, for example avocado on the 12th of December.  Yet if parents are offering a single food on the day a baby hits the magic 6 months, not because that's the day baby has chosen to eat, but because of the date on a calendar - it's clearly guideline and parent led.

We're instead reducing the process to baby feeding themselves, which for me is more accurately termed "self-feeding".

The joy of baby-led weaning is that parents don't need to decide when to introduce food - be that via a list describing "readiness" or because baby reaches a set date.


In a study exploring whether it was feasible to let infants decide when to start solids, researchers found out of 602 infants, 56% had reached out for food before age 6 months, but 6% were still not reaching for food at age 8 months. (1)

Another found that the "readiness" for solids in health term, typical infants ranged from 17 weeks to 8 months.(1)

Gill Rapley herself conducted a small study including babies in mealtimes from 4 months. She found that whilst some younger infants picked up food and took it to their mouth, some chewed and spat it out but only the older infants swallowed it.  She concluded:


"Their own development decided for them when the time was right!"(1)

This was echoed in a couple of the studies gathered for the review; researchers felt it was likely internal and external systems develop in tandem.  So when baby had developed the skills to eat, his gut was ready to digest it (1).

This makes sense.  Historically we know cave-woman carried baby on her hip, and that he would naturally start reaching out - how would she have known to stop him?  In the study above, over half of the babies had reached for food before 6 months, which to me suggests that more than half appeared developmentally ready to handle and explore food to some degree.

We sometimes hear people say that picking something up and bringing it to their mouth, isn't an indicator of readiness, because babies put everything in their mouth at that age.

Or to re-phrase another way, around the time science has established babies are ready to start solids, they start bringing things to and putting them in their mouth. Well that's a handy coincidence isn't it?


With BLW, starting solids is like embarking on a journey via the scenic route.


Eating is defined as: "put (food) into the mouth and chew and swallow it."

Yet to even get that far, one needs to master picking it up.  How much pressure to apply so it isn't dropped or squashed, and maintain that whilst their hand is moving.  They need to concentrate and focus long enough to "succeed".

﻿
The food then needs to get from hand to mouth, which sounds easy to you or me, not so much if we consider younger infants only have the palmar grasp" at their disposal.  Their entire fist holds the food and only that protruding can be accessed, making it difficult to transfer something smaller and more tricky to eat, like a pea.

Anything in the mouth then needs breaking down small enough to comfortably swallow, before being pushed against the roof of the mouth and propelled backwards by the tongue.

Babies who still have their tongue thrust reflex or aren't developmentally co-ordinated enough to do the above, lick, spit or drop food as Gill highlighted.

Why would we assume baby's first motive is to swallow?  What about mushing, licking, squishing and chewing?

Just because a baby can get food into his mouth, doesn't necessarily mean he's ready to eat it - but does it mean he isn't ready to start the journey?

If science suggests babies are ready to "eat" foods at 6 months, doesn't it make sense a self-feeding infant may want to undertake some practice before then? 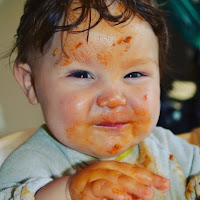 Babies don't get up and walk one day, they cruise along furniture, push carts and hold hands.  Why does solids have to be all or nothing?

There are no guidelines around what age a baby should be exposed to foods or practice handling them.


With Baby-led weaning the transition to eating bigger amounts of food may also be slower; think of making a smoothie and how much food you need, and then imagine sitting and eating a similar amount as whole food - puree feeding is the same.

This more gradual shift may help prevent constipation and encourage a more gradual reduction of milk feeds, which remain valuable in terms of brain growth, particularly throughout the first year.

Whilst parents should be in no "rush to mush", what benefit is there to parents ignoring the plethora of sensory opportunities food can offer, in favour of a sensory class and an empty bowl and spoon to try and pacify baby at mealtimes?

What's your experience?  When did you start solids?  If you want to read a more detailed, referenced article you can do so here.

You'll read many wide and varied opinions on the subject, so it's important to remember this is just mine.   Please also bear in mind this is general discussion and may not apply to your baby or situation.  Always consult your healthcare team with any questions or concerns about starting solids with your baby.